I’m no couponer, but… Shea Moisture is on sale!

I live this conditioner and bubble bath. Great products and they are awesome for keeping natural hair healthy. Currently they are on sale at Walgreens, buy one get one free! (Photo taken at the CVS in Chicago on Armitage near Palaski). 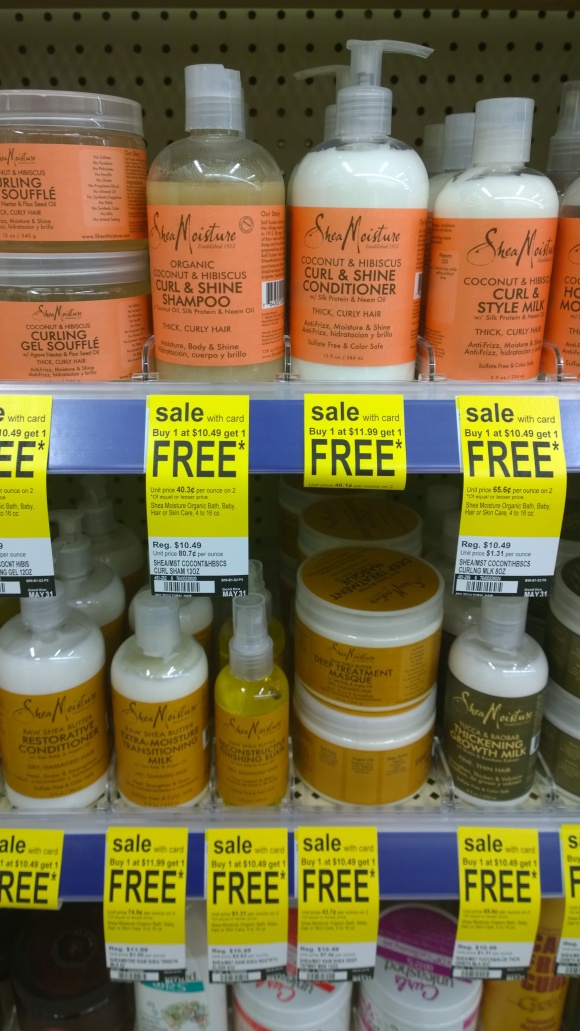 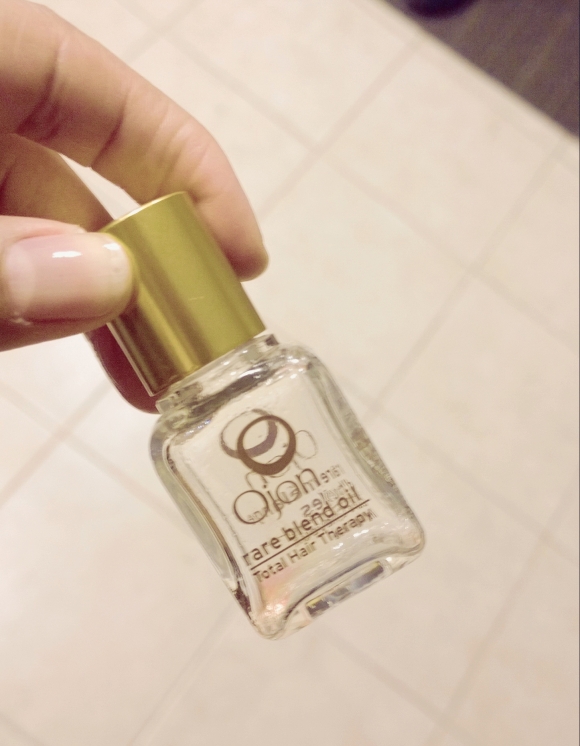 I use the fact that I travel a lot as my excise to buy excessive amount of travel sized beauty products, when I really just want to try them out for more than a sample run but not spend a lot of my hard earned money. Enter Ojon Rare Blend Oil – Total Hair Therapy. I saw it in those bins near the Ulta registers and gave it a try for my curly winter hair that was starting to lose its sheen and it works great. Every few days I would use some on my scalp and rub it thru my hair. A little goes a long way (which is good since that tiny bottle costs $15). I guess maybe I’ll spring for the larger 1.5 oz bottle at $35… Ya know, when I stop travelling as much. LOL 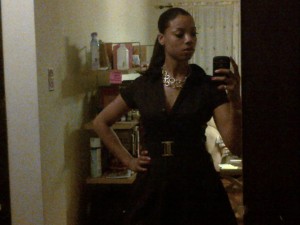 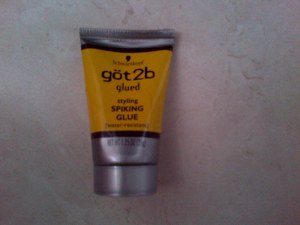 I went out with friends last night and was too lazy to curl my hair or pull a wash-and-go so I slicked my long hair back into a ponytail (which I rarely ever do for a night out). A while back, I came across the got2b glued water-resistant Styling Spiking Glue and grabbed a trial size to see just how well it might work. This easily became my go-to product for slicked back ponytails! Even after wetting my hands, mixing the glue and brushing it into my hair, it doesn’t make my hair get wavy like a lot of gels. After hours of dancing and doubling over with laughter I never have a hair out of place! #success

I included a pic from last night’s ponytail look (and for clarification, its all me, no extras although I imagine the product could work for a clip in poytail too). I should have turned more lights on and took a clearer version, but I was rushing so this is the best you will get for this go-round… Enjoy!

I decided to use the plethora of flight vouchers I had earned during the year and spend the holidays with my family. For Christmas, I headed east to Detroit and for the New Year I headed west to Minneapolis where my sistercousin Gabbi, her husband and their two WONDERFUL kids (ages 2 and 5) were finishing their holiday vacation with lots of fun and tons of love. It was definitely different, but it really reminded me not only how wonderful my family is, but also how much fun kids can really be.

The 2 year old is truly a SUPER model. This chick has “diva” written ALL OVER HER. I don’t have a clue where it comes from, but she loves to walk in heels, carry big purses, sing/perform and go outside. In Minnesota. In January. And I think its just because she likes to dress up in her cute winter coat and hat. She also likes to take pictures. Of herself. I don’t even know how she figured it out but there were about 25 self-taken photos of her face in my Blackberry by the time I left. The last pic is a drama queen moment… which she is known for. Its actually quite entertaining. She’s like a little Mariah Carey in the making. Oh,and she made me a Fresh Beat Band fan too. LOL

I did a little shopping and found her this cute Calvin Klein Jeans girls’ outfit on clearance at Macy’s (much cheaper than shown here). It was adorable on her!

The 5 year old is a kid GENIUS and sports analyst/fanatic. I’ve never seen a kid WANT to watch so much ESPN – all day long if he could! He absolutely loves all sports and can tell you the score/time/coach/top players/bracket for pretty much every game coming on – both college and pro (see pic below where he is cheering on Wisconsin). He was a champ and made it all the way to midnight, although he did get a nap in… but we won’t count it against him. I like to cuddle with him and I always stock up on hugs and kisses since I don’t get to see him as often as I did when I lived in Minnesota and was his “nanny”. I love the 3rd pic where you can see our freckles 🙂

It was such a fun, peaceful, relaxing weekend, I didn’t want to leave… and I’m already looking forward to going back! I miss them a lot *sad face*

Oh,and you might notice that I CUT MY HAIR! I went with bangs, which I hadn’t had since I was about…. oh, 10 or 12, maybe? When I cut them in Sharon’s bathroom with her safety scissors and got yelled at by my parents and made up some lie about my hair falling out. LOL…. oh to be young again! So my item of the day, almost exactly 3 years after the last time I posted this item of the day – A HAIRCUT!!! And once again, the beautiful work was done by none other than Mr Brian Graham himself. Check him out at Brian Graham Salon or check out their Facebook page… if you’re going to be in Minnesota, save up some money, pay him a visit and post a pic for us to see!

Sorting through my Mobile Uploads–Crazy Edition

Many of my friends on Facebook joke about my fondness of my Blackberry Tour’s camera and capturing the unexpected moments that occur right in front of my eyes…  Today I realized that I had nearly 300 photos on my phone’s memory card so while I’m organizing and deleting. I definitely think some of these are funny enough that they should be shared with the rest of my blog readers… Check out these hilarious pics and the captions beneath them… I’ll be sure to post more later on. Obviously there are PLENTY to go around, so look for the Fashion, Travel and Food editions to follow!

An EXTREEEEMLY drunk guy at the casino trying to get a crippled April to go home with him and become his wife, while Sharon happily pushes April’s wheelchair so she’s practically in the guy’s lap. LOL – I love my girls….

Amtrak took a “smoke break” at one of the stops and we hopped off, into the COLD weather, only to see a very tall guy wearing the world’s shortest shorts ever. Nice legs.

My grandfather decided he wanted a garden in his Detroit backyard and got a little carried away… a few months later he had taken over the backyard and converted it to a farm.

Bobby’s roommate (car on left) came home a little “tipsy” and decided to park in the END SPOT, against my car (on right) leaving me NO SPACE to get  out. I sent this pic along with some choice words.

When my 5 year old cousin BJ found out I “work with Ronald McDonald”, his response was “So… Cousin Cherish works with a clown? Like, in her office?” Hahaha – I swear he thinks like a grown man.

Father son duo taking a scooter ride down the street. Poor kid… I sure hope that man doesn’t have gas.

Suburban prostitute trying to get a gig but doing stretches, on the corner, in shorts, on a brisk Spring day. Get it girl! *giggle*

The most appropriate cake-topper for my relationship… and the very close runner up.

The photo I showed the beautician, and the hair style she gave me because she felt it look better. Thus, I would NEVER recommend Stacey at Mirror Mirror Salon in Chicago unless I wanted to make sure you look way worse than I do.

And last, but not least… My brother, Bravo, got bored in a CVS one morning and starting rearranging the toys and sent me a pic… *shaking my head*

The item of the day is the Barnes and Noble Nook Color, available for $249 at BN.com or Best Buy.com!!! This e-reader looks AMAZING and has been getting good reviews. I asked my parents for a Nook for Christmas, I would love the color edition for magazine reading, but really don’t NEED it so the basic version of the Nook would be ok for me. I’ve debated buying an e-reader for a couple of years, and many of my friends that have them absolutely love them!

I Love My Hair!

This Sesame Street video is flying around the internet and I liked it so much I made it the main video on my blog! I had been waiting and waiting for a video that inspired me nearly as much as the Dove “Evolution” ad (which showed the process of turning a model into a MODEL but pretty much creating a new, an artificial, person – which is unfortunately the image we are encouraged to envy by mainstream media). This muppet shows off her many hairstyles and sings a very cute song to show them off. I LOVE THIS VIDEO!

Sesame Street “I Love My Hair”

I got my first relaxer (chemical straightening process, for those who aren’t familiar) in my kitchen when I was seven years old. Yesterday I finally watched Chris Rock’s movie “Good Hair”, and nearly cried when they showed 3 and 4 year old kids getting perms because they “needed to”! ARGH!!! They are babies!!! Overall the movie was a very interesting one… funny, yes. But it really talked about so many aspects of a Black woman’s crown and glory… and a source of so much pain, both internally and physically, that many people can never truly understand.

In undergrad I changed my regular 8 week relaxer schedule to 12 weeks, then 16 weeks, then 6 months and eventually I was getting them once a year… which was when I realized I really didn’t NEED them at all. So I stopped wasting my money on relaxers (but still fed my addition for hair coloring!). I grew my relaxed hair out, chopping it as I went to get rid of the old processed hair. I started trying new products and styling tools for straightening and began to embrace my naturally curly hair. I was initially terrified to wear it curly to work and I used to straighten my hair before job interviews or big events.  I created a “hair diary” a while back… I’m still adding old and new pics to it, but this shows fav pics of a lot of the different hair phases I’ve been through.

Now, I do whatever is convenient, because I love my hair curly AND straight and in the end, what is most important to me is having HEALTHY hair! I love to see my girlfriends, many of whom are “natural” and happy, and all the creative styles they come up with. I have lawyers and doctors and engineers and teachers in my circle who embrace their natural textures and rock em like they belong on a concert stage somewhere. Check some of us out… (No creamy crack allowed… LOL)

NOW…. years later… I can actually say I LOVE MY HAIR!! I can’t imagine ever putting those chemicals in my hair or on my scalp again.

If you’re considering the transition (cause it isn’t easy for everyone!) check out some of the sites below for suggestions, inspiration and pics of other women who made the transition and are loving their hair!

Be sure to go out and get the movie “Good Hair”!